Pruning young trees requires an understanding of how trees grow.  Sounds obvious, but in truth many people lack even a basic understanding of this.  There are three key points one needs to know about how trees grow in order to get them off to a healthy start.  Without this knowledge you can make mistakes that could persist for the life of the tree, reducing its aesthetic value, and even possibly leading to catastrophic limb failure years later.

The first thing to understand is that leaves equal food.  Just that simple.  As I mention on my pruning page, leaves are the little sugar producing factories that feed the whole plant.  Less foliage, less food.  So overpruning any tree is never a good thing- and on a young tree, this is a lot easier to do by just removing a handful of branches.  At planting, the only branches that should be removed should be broken ones, large dead ones, and maybe very poorly placed ones (although if any tree you are considering purchasing has more than a couple of these, you probably should choose another specimen).

The second thing to keep in mind is that low branches not only bear leaves that feed the tree, but their presence also helps thicken the trunk in the area where they are attached (this is true of smaller branches attached to larger branches as well).  This thickening of course helps the tree support itself.  So removing too many low limbs too quickly not only reduces food to the plant, it weakens the plants ability to hold itself upright.  That does not mean they should never be removed however, and that leads to the final point.

Low branches do not go higher as the tree gets bigger.  May seem obvious, but so many people think this is true I feel I need to clarify that here.  Imagine you put hooks into a pair of  youngish trees to hang a hammock.  That hammock doesn’t rise as those trees grow.  What you’ll notice instead is that  the tree grows more and more wood tissue around the hooks, eventually swallowing them up. Likewise, young branches remain at the height they first emerged at. 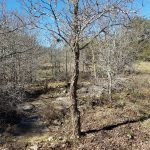 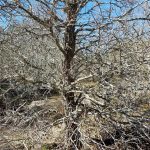 Native tree in full sun with all its low limbs, about 5 inches diam.

You will notice that in a forest setting,  tree trunks are usually free of low branches, shooting toward the sky like giant columns.  This is because the heavy shade of the overstory causes young branches to die away very quickly (and any parts remaining on the tree get swallowed up just like your hammock hooks).  In a prairie setting, or in a man-made one, these low branches have enough light for the leaves (and therefore the branches) to stay alive.  This can actually be a problem for the tree structurally, and for the average homeowner, who finds his or her small piece of the planet made less usable by these low limbs.  So low branches do need to be removed.  But it must be done gradually,  a few per season, as the tree adds upper limbs to compensate for the leaf loss.  Only if this removal has been neglected for too long and if the tree is large enough to withstand it should you remove a large number of them at once.  An exception to removing young branches is certain species that evolved in such a way that low branch retention is important to their long term health, such as magnolias and certain oaks and conifers. 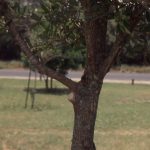 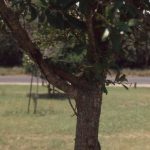 Besides low branch removal, branches that have very little space between them require one of them to be removed, as shown above.  Branches that have a very sharply angled space between them also need to be removed. These types of limbs often have included bark, which often leads to splitting years later when the branches involved are much bigger.  This is especially important when there are two or more upright stems involved that are similar in diameter.  These are called codominant stems, and can lead to disastrous failures when the tree is mature. In some species, like Bradford pear, codominant stems are an unavoidable genetic characteristic of the tree (and one reason to avoid this species).  On others, they are sometimes the result of damage, or poor pruning in the nursery, and can often be corrected if caught early.

Finally, the most important thing to remember when performing branch removal is that it is absolutely essential that it be done properly, especially if the branch is of significant size (maybe more than an inch in diameter on most trees).  This means following the proper pruning guidelines shown on my pruning page.

As always, you can call me to arrange an on-site consultation.  I can advise you personally on how to prune young trees, or on species selection and placement prior to planting.