Oak wilt is a very complex disease.  This information is only intended to address how oak pruning impacts the spread of the disease.  Central Texas is considered the area most 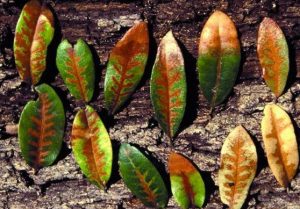 seriously affected in the United States.  This is due in large part to the prevalence of live oaks here, and the propensity for root grafting which this species has.  It has been recognized by researchers and expert arborists that the vast majority of the spread of oak wilt occurs underground, from live oak to live oak, through these grafts.  New infection centers can become established when spores are carried to fresh, unpainted wounds on healthy oaks.  In Texas, these spores only come from red oaks, which create spores on what are called fungal mats.

In an attempt to suppress the disease, various government agencies have published overly simplified recommendations which have unfortunately been misinterpreted over the years.  In order to correct this,  Guy organized a group of representatives from the International Society of Arboriculture, the Texas Forest Service, and the Texas AgriLife Extension Service which in 2011 co-published in these guidelines for oak pruning.

Some key things the general public should be aware of (which are referred to in the guidelines) are:

These newest guidelines take some of the above information into consideration and clarifies that pruning to eliminate injury to branches, or as necessary for property protection or personal injury protection, as well as to remove dead branches can be done at any time of year, but I would say that during the spring time months, it should only really be done by competent, qualified arborists  (see my choosing an arborist page.)

Competent arborists have known and adjusted for these facts for decades, and safely pruned oaks throughout the year.  It is critically important that it be done judiciously, however.   That is what makes hiring a Certified Arborist like Guy LeBlanc important.  When the work is being done personally by someone with the level of experience he has, you know the tree care you are receiving is the best possible.

For more on this, see my January 2012 blog post and search YouTube for my Central Texas Gardener appearance from that month in which I discuss oak wilt.