Pruning is very likely the most common tree care practice in the U.S., representing a very large majority of the annual income produced by tree care service companies. But how beneficial is it? The answer is, when necessary and done properly, it can be very beneficial.  When done improperly, it can be quite detrimental.  The following information can help you look at a tree and tell if it has been well-pruned, and so can help you assess a tree care service company.

Proper pruning is that which focuses on tree health and public safety as its goals.  This means that  pruning done to get more sunlight on your lawn, for example, or reduce leaves in your swimming pool, or improve your view of downtown, is very likely pruning which is going to be detrimental to your tree.

Public safety is an important part of tree care.  The removal of large dead branches or defective branches likely to fail is a critical responsibility of a property owner.  Just do a quick internet search for tree related fatalities to see how critical.  The good news is that proper pruning minimizes the risk of tree and branch failure by encouraging ideal structure and reducing the risk of decay.  Conversely, it is very important to remember that improper pruning increases the risk of failure by doing the opposite things.

So what exactly is proper pruning?  I think there are two basic ways to assess whether pruning has been done properly or not.  The way in which the individual pruning cuts have been made, and the total amount of live branches that have been removed from the tree.  For decades, it was thought that proper branch removal meant cutting off the branch as flush as possible against the trunk or stem to which that branch was attached, hence the term “flush cut”.  Then, in the mid-70’s, a forester named Dr. Alex Shigo stood the tree care industry on its head by publishing the results of his research which showed conclusively how injurious this practice was (and still is, as unfortunately many ignorant tree companies still practice it). 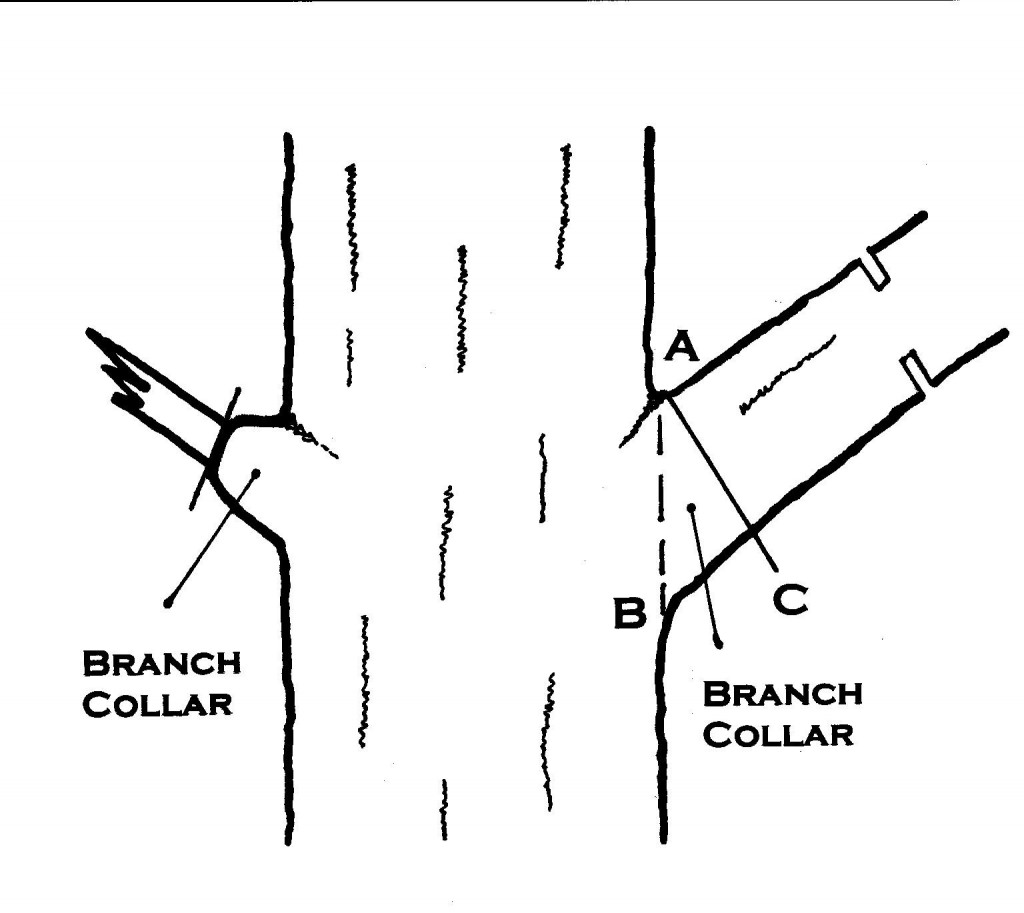 Dr. Shigo’s research showed that flush cuts greatly increased a tree’s susceptibility to decay and cracking.  Not only did flush cuts greatly increase the surface area of a pruning cut (an obvious fact overlooked for decades), but they removed critical natural barriers against decay fungi.  This natural defense mechanism, referred to as “compartmentalization of decay in trees (CODIT)” led to Shigo’s proposal of new pruning techniques which preserve the base of the branch, which he referred to as the “branch collar“.    Ask any company you are thinking of hiring what pruning technique they use.  If they do not convincingly define the branch collar pruning technique to you, do not hire them!

In the diagram, the branch collar pruning technique is illustrated on both a dead branch (left side of trunk) and live branch.  A flush cut (injurious) is indicated by the dashed line between A and B.  This is still commonly done.  The proper cut is from line A to C on the live branch, and just outside of the swollen knob of live tissue on the dead branch.  It is critical to remember however, that there is tremendous variety in the angle of attachment of branches, and their size ratio to the trunk, and that these and other variables change the precise angle the cut should be made at.  This is why educated experience is required for quality pruning.

The other basic measure of quality tree pruning is the amount of live branches removed from a tree.  For healthy trees live branch removal should be absolutely minimal.  A rule of thumb used by some industry associations is that no more than 25% of the live branching should be removed.  I do not know a single reputable arborist that agrees with that high a percentage.  I rarely remove more than 10% of a tree’s live branches, and more typically am removing about 5%, for such things as street and building clearance, and limbs rubbing against other limbs or trees. Rare exceptions to this would be trees that have serious physical defects (and hence not healthy).

Very frequently property owners in central Texas assume that the removal of small live branches in the interior of trees, usually referred to by these people as “water suckers” is part of proper pruning.  Such people have often been misinformed that the small branches suck excessive water “out of” the tree.   The fact is, the removal of large amounts of small sprouts from a tree is injurious.  A tree produces as much foliage as it needs to feed itself through that process you may remember learning about in grade school, called photosynthesis.  Less leaves = less food; it’s that simple.  But what a lot of folks don’t know is that these small lateral branches are also critical to the strength development of the branches to which they are attached.  This is why trees and/or branches that have been stripped of all interior limbs are far more likely to experience breakage during severe weather.  It is also why research recommends leaving low branches along the trunk of young trees.  Many tree butchers – excuse me, that is unfair to the meat industry – tree hackers actually advertise this stripping of interior sprouts as desirable.  They call it “tree sculpting” or “umbrella look”.  Professionals usually refer to it as “lion-tailing”. If a tree company advocates this type of pruning, or examples of their work reveal that is how they prune trees, do not hire them!

“Topping” is another example of excessive foliage removal.  In this instance though, the foliage is removed from the ends of limbs, usually all the limbs, rather than the interior.  It was more common in years past than it is now, fortunately, and thanks to the efforts of competent arborists, most consumers now recognize it is an extremely injurious practice that is only appropriate in very rare circumstances (such as treating certain instances of storm damage in some species of trees).  Although some species such as our crepe myrtle and some European trees seem to endure topping, in North America it is strongly recommended against.