This year’s drought has been quite reminiscent of the ones in 2011, except this one started earlier (and thus far seems to have ended earlier). Unlike the 90 plus days of 100 plus degree heat in 2011, this year’s number of super hot days was much lower (again, thus far), but because it started earlier, many trees still struggled or died. In fact, this was the first spring in my business’ 40 year history that I was calling my clients to recommend that they irrigate their trees.

Yet the good news is that probably because we had far fewer hot days, we have not seen near the tree losses state-wide that we did in  2011, when losses were in the millions. There were areas around Brownwood (aptly named after 2011) that had acres and acres of trees die (many of them junipers). Here in Austin, it seemed as if we lost 5 or 10% of the pecan trees on the east side, and even live oaks, the sturdiest tree in the forest, suffered significant losses, especially on high grounds. The area uphill from Barton Springs Pool, near the polo fields (better known as the overflow parking dustbowl) lost quite a few live oaks. So the losses were city- and species-wide. 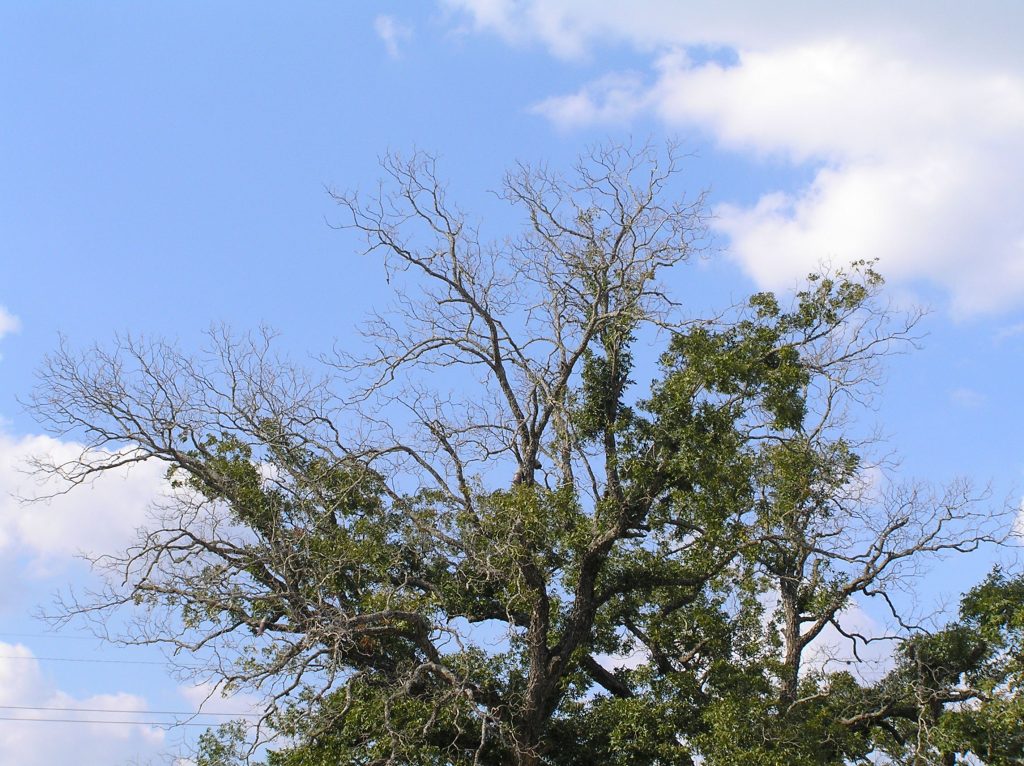 Dieback in pecan from drought stress

The dieback shown here is typical of what is seen with drought stress.  It may look very familiar to those who experienced the frozen hell imposed on us by Governor Abbott and his PUC cronies on Valentines Day 2021 (yeah, I said it-  this is my damn blog!). It is not unusual for plants to have a similar reaction to very different problems; overwatering and underwatering can both make a houseplant’s leaves turn yellow. With drought though, there’s usually some browning on the edges of the leaves first. END_OF_DOCUMENT_TOKEN_TO_BE_REPLACED

As I write this, central Texas is experiencing its worst winter weather event in decades (so what else can I do but write?).  Having done tree work here for 40 years now, I’ve seen quite a few cold weather episodes in Austin.  There was a five day stretch in December of ’83 where we never got out of the 20’s.  Many palms and most tallow trees around Austin froze to death that year, but there wasn’t any precipitation, so breakage from snow and ice wasn’t an issue. 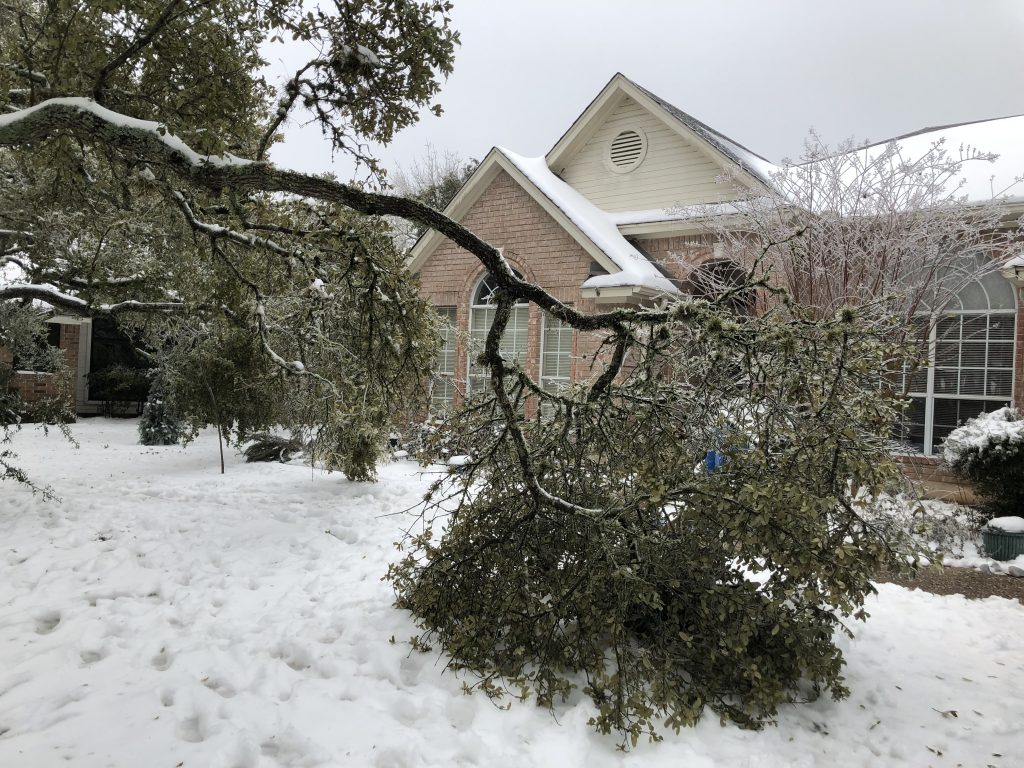 A couple years later  (’85) we had two events a couple weeks apart that totaled about 7 inches of snow but also pretty bad icing, and we got some breakage with that.  In ’89 we got the coldest blast I can remember, down to about 4F, but it was a quick dip, and I don’t remember a lot of breakage with that one.  (Am I sounding like an old man yet??)  Over my four decades here, I’d say I’ve seen at least 8 ice events bad enough to result in at least some breakage.  So they happen more often than you might think.

Okay, so what can you do about it?  END_OF_DOCUMENT_TOKEN_TO_BE_REPLACED

Oak wilt continues to be an issue throughout Austin, central Texas and much of the central part of the U.S.  This often fatal disease is spread by a fungal organism known as Bretziella fagacearum (previously Ceratocystis f., but scientists often change organism names just to mess with us arborists!)  Other than the name change, there’s little new about this disease, other than some news about DNA testing, but the likelihood of fast, accurate field test kits being available anytime soon is small.  For more details on oak wilt, see my previous posts and my Oak Wilt Page.

At this time of year, whether you should or shouldn’t prune your oaks is quite forward in the minds of many neighborhood activists.  You may have seen signs saying not to prune at this time of year.  For years it has been recommended by various government agencies that one should avoid pruning oaks in the “spring”.  The definition of spring has changed quite a bit over the years.

My advice to homeowners is END_OF_DOCUMENT_TOKEN_TO_BE_REPLACED

Pruning young trees requires an understanding of how trees grow.  Sounds obvious, but in truth many people lack even a basic understanding of this.  There are three key points one needs to know about how trees grow in order to get them off to a healthy start.  Without this knowledge you can make mistakes that could persist for the life of the tree, reducing its aesthetic value, and even possibly leading to catastrophic limb failure years later.

The first thing to understand is END_OF_DOCUMENT_TOKEN_TO_BE_REPLACED

Cabling is the use of hardware to support trees or branches that are defective or weak but that the tree owner does not wish to remove. Sometimes weak limbs are retained because removing them would be very stressful on the tree. Cables are also sometimes used to keep healthy limbs from settling lower over time with gravity. 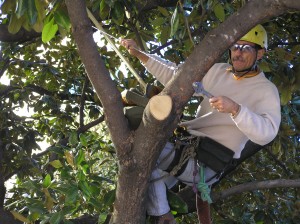 Defects could include a cavity or decay, a weak connection between two branches or inadequate branch strength.  It is critical for a property owner to realize that such defects make the risk of limb or tree failure higher, even when cabled, and that complete removal of the weak part is safer than cabling, especially if the consequences of failure are severe.

There are many cabling techniques out there, but only a few meet industry standards, which are fairly detailed.  A few things you can look for to determine if a cable was properly installed include END_OF_DOCUMENT_TOKEN_TO_BE_REPLACED

For more details about oak wilt,  see my dedicated oak wilt page, or go to my previous post on it.  But since it is that time of year, I thought I’d revisit the issue here.

Regarding those signs, you’ll notice most of them say “Do NOT Prune Oaks…”, etc.  Well, the guidelines they were derived from never said “do not prune…”.  They recommended avoiding oak pruning in the spring.  The latest version of those guidelines (on my oak wilt page) indicate what oak pruning can (and actually should) be done year-round, but really should be left to professionals during those springtime months. END_OF_DOCUMENT_TOKEN_TO_BE_REPLACED

While tree pruning is probably the most commonly performed tree care service, if done incorrectly it can have severe negative long term impact on tree health and safety.  For a detailed explanation of what correct pruning is and isn’t, see my “Pruning Tips” page.

One quick way to determine if you are dealing with a professional is by the language they use.  END_OF_DOCUMENT_TOKEN_TO_BE_REPLACED

Ball moss and mistletoe are two common tree pests in Central Texas that are frequently removed during tree pruning.  Here is some info on what these plants are, how they are harmful and how they can be treated.

Ball moss is not really a moss, but an epiphyte or air plant, meaning it’s roots are exposed to the air.  It is in the bromeliad family, and so is related to pineapples, believe it or not.  While the majority of experts believe it is not harmful, END_OF_DOCUMENT_TOKEN_TO_BE_REPLACED

Tree fertilization can be performed in numerous ways and goes by a number of names.  Sometimes called “deep root feeding”, this term is incorrect for a couple of reasons, and is a good clue that someone calling it that has a poor understanding of tree care. END_OF_DOCUMENT_TOKEN_TO_BE_REPLACED 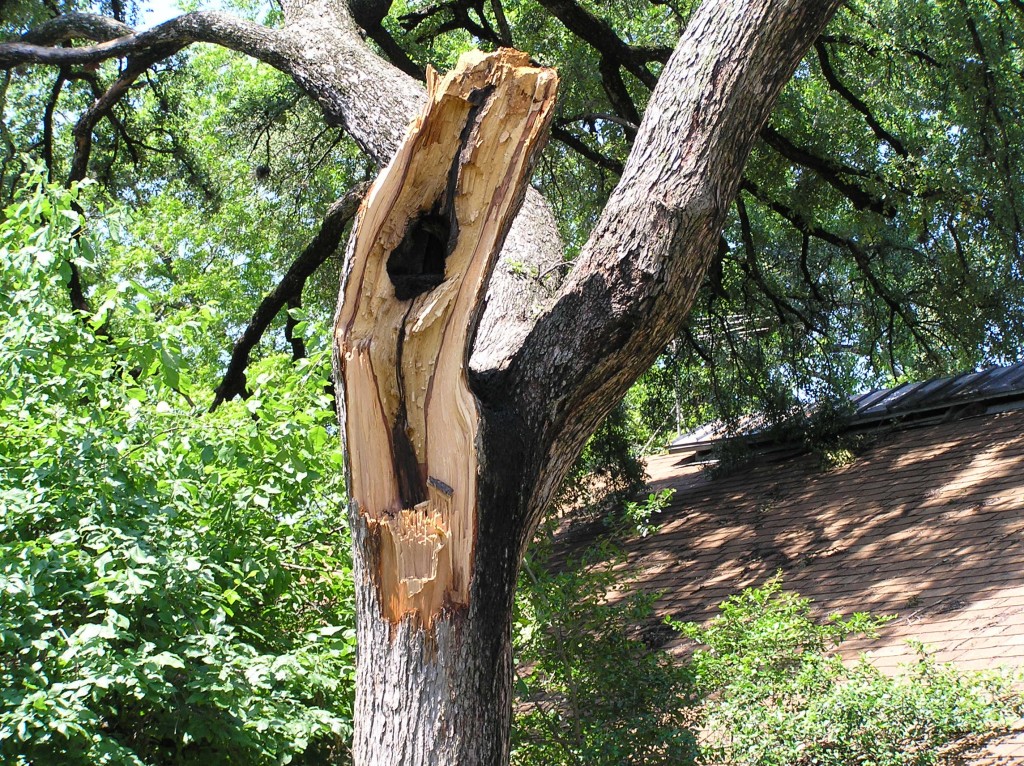 As mentioned on my Pruning Tips page, tree safety is one of the two most important aspects of tree care.  And a critical component of tree safety is knowing how to assess potentially hazardous trees or limbs.  Being able to detect decay is a major part of that.

A few things to understand right off the top about this subject;  tree decay is caused by numerous species of fungi, and often the loss of wood strength they cause is not visible externally.  That means that no intelligent arborist is going to guarantee the safety of any tree or limb with 100% certainty. END_OF_DOCUMENT_TOKEN_TO_BE_REPLACED